Nigeria Is More Than Any Political Party, Says Buhari 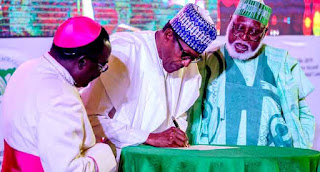 President Muhammadu Buhari has urged Nigerians to remain peaceful during and after the election
He said the following while signing the final peace accord at  the International Conference Centre in Abuja.

The President emphasized that violence isn't an option and all citizens must shun all action that would deter our peaceful coexistence and break the law.

“I am making a special appeal to our young people: Do not allow yourselves to be used to cause violence,” he told the audience at the event. “Please eschew all forms of violence and cooperate with all the relevant agencies during these elections.”

President Buhari added, “We will vote according to parties, but in the end, the only real party is Nigeria, our country.

“Our elections are important only to the extent that they make her strong. Let us do our best and ask God to bless us and our country.”

With less than 72 hours to the elections, the President noted that there was anxiety in the air, saying it was typical of any form of competition and contest no matter the level of preparation.

“I call on all Nigerians to contribute to the building of a viable polity by more active participation well beyond the mere casting of votes,” he urged.

“Elections by themselves do not constitute Democracy. It is the spirit of citizenship engagement that utilizes the energy of citizens towards the attainment of good governance.”

On the incidents in which people lost their lives during campaign rallies, President Buhari prayed that God grants them eternal peace.

He, then said now that campaigns were winding up, the next assignment for Nigerians was to go out and exercise their civic duties.

The President appealed to his fellow contestants to commit to the ideals of a poll free of violence, so as to keep the country and its people safe.

President Buhari also claimed the security agencies have been fully briefed that their visible neutrality was pivotal to the conduct, credibility and success of the polls.

He reassured all that the Independent National Electoral Commission (INEC) had already made known to the people that they have done everything possible to ensure free and fair elections.

He thanked the  National Peace Committee (NPC) led by General Abdulsalami Abubakar (rtd),  the Secretary General of the Commonwealth and other stakeholders for their efforts towards conducting peaceful and credible election
POLITICS