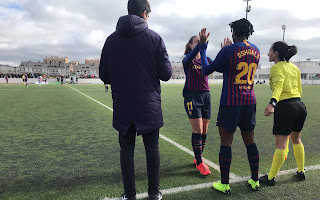 Super Falcons striker Asisat Oshoala had a dream start to Barcelona career having scored with her first touch of the game as they defeated Rayo Vallecano 4-0 in a league match.

The three-time CAF Women’s Player of the Year scored Barcelona’s fourth goal of the encounter in the 63rd minute with her first touch of the game, less than a minute after replacing Alexia Putellas.

The coach previously said:
“Asisat has arrived in a good physical condition … I think that from next week (Sunday) she can start to bring us very good things to the team,” Cortes told the media, while explaining why the 24-year-old Nigerian was left out against Albacete.

The AWCON 2018 winner had great European success having previously featured for English giants Arsenal (2016) and Liverpool (2015), before moving to the Chinese League with Dalian Quanjian, where she was top scorer in 2017.