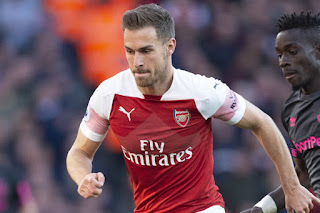 Aaron Ramsey, Arsenal midfielder will rise to the position of the second best paid - player at Juventus, when he officially joins the Serie A champions this summer, BBC reports.

Ramsey’s current deal with Arsenal expires at the end of the season, after they withdrew their offer of a new contract last year.

28-year-old Ramsey has agreed a four-year contract that will see him join the Italian club as a free agent, ending his 11-year deal with the Gunners.

The deal will see him earn over £400,000 a week, only behind Cristiano Ronaldo who gets £500,000 a week and happens to be the first highest paid

Ramsey will also be the highest-earning British player ever based on basic salary.

In confirming the deal, Juventus said the club would incur costs of 3.7m euros (£3.2m), but did not specify what exactly the fee was for.
SPORTS