We will liberate Kwara from Saraki - Tinubu 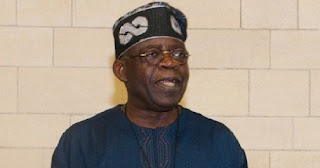 National Leader of the  APC, Asiwaju Bola Tinubu has urged the mammoth crowd and party supporters at the Ilorin rally to liberate Kwara from the clutches of Bukola Saraki, in the forthcoming general elections. Tinubu, a former Governor of Lagos, made this call on Monday at the APC Presidential Campaign rally in Ilorin, Kwara.

The rally was attended by President Muhammadu Buhari, who led other APC stalwarts including, Chief Bisi Akande, Abdullahi Adamu, the Party National Chairman, Adams Oshiomhole and others to the gathering.

The APC chieftain, who talked mostly  in Yoruba language, alleged: “It is a long time they have been mismanaging the state’s fund.
“Who is doing this? It is Bukola Saraki. We are here today to demand for freedom and liberation of the state. “Today, we are here for Bukola Saraki. We are no longer his slaves,” he said Tinubu noted that his party had nothing against the Senate President’s father, the late Chief Olusola Saraki. “We pray that God shall repose the soul of the late sage, Olusola Saraki and grant him Aljanah Firdausi,” he said.

Tinubu told  the Kwara people to take the advantage of the elections to liberate themselves from the political slavery in the state.

Tinubu educated the people on how to cast their votes appropriately for APC and to avoid rejected ballots. Speaking in same vein, Oshiomhole said the rally was a celebration of the end of Bukola Saraki’s reign, who had held the state by the jugular. He said the mammoth crowd at the rally is an affirmation of the “O to Ge” meaning “Enough is Enough” slogan across the state.

“You must vote APC to defeat Bukola, who has underdeveloped Kwara and who controls your governors as a master will control a cook. “I cannot wait until Saturday, when the referendum to chase out Bukola Saraki will be carried out,” he said.
POLITICS