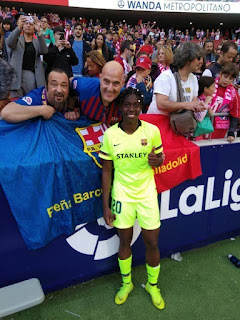 The top-of-the-table clash was played in front of an astonishing 60,739 onlookers at the Wanda Metropolitano , a record for a women's football match at club level.

Asisat Oshoala and Toni Duggan got on the scoresheet for the Catalans as they pulled themselves to within three points of Atleti's tally of 66. 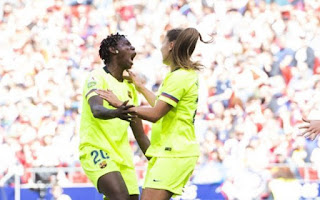 Oshoala opened the scoring on 65 minutes as she got on the end of a corner to silence the Wanda.

With ten minutes to go Duggan killed it as a contest, making the last six games of the season a lot more interesting than they may otherwise have been.

The packed stadium weren't too disheartened by the result though and despite the score being 2-0 to Barcelona , those in attendance sang "proud of our players". Women's football •
SPORTS