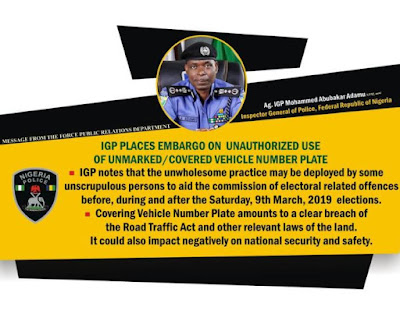 The acting Inspector-General of Police, Mohammed Adamu has ordered the immediate ban on unauthorised use of unmarked and covered vehicle number plates across the country.

The ban was issued through official statement by the Force Spokesman, Frank Mba, an Assistant Commissioner of Police, on Tuesday in Abuja. Adamu gave the order following intelligence report that covered number plates might be used to commit electoral related offences before, during and after the Governorship and House of Assembly Elections slated for Saturday.

He warned that covering .of vehicle number plates was a clear breach of road traffic Act and others laws of the land. The police boss said that such practices could also impact negatively on national security and heighten criminal activities.

The Inspector directed all Assistant Inspectors General of Police (AIGs) and Commissioners of Police (CPs) in the zonal and state commands to strictly enforce the order. He warned further that any security personnel found escorting their principals with an unmarked vehicle or covered vehicle number plates, would be arrested and dealt with accordingly.