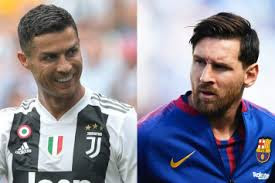 Argentina international and Barcelona star player, Lionel Messi made his mark with two goals and two assists as FC Barcelona put five past Lyon on Wednesday evening, matching what he described as an impressive midweek performance from Cristiano Ronaldo .

The Portuguese star, had netted a hat-trick on Tuesday to pilot Juventus past Atletico Madrid and Messi was asked about his rivals' triumph after his own side's win.

"What Cristiano Ronaldo and Juventus did was impressive," Messi said after the match.

"I thought Atletico Madrid would be tougher.
"Ronaldo had a magical night with three goals."

Messi and his teammates will soon know if they'll face Ronaldo and Juventus in the next round, but the Barcelona captain isn't thinking about that.

He said: "All of the opponents are complicated," "Ajax , for example, showed that they're an amazing team of youngsters and they don't fear anyone.

"It'll be difficult no matter who we face. "We have to prepare ourselves for a tough challenge."

He also analysed the match in details saying, it wasn't an easy win as Lyon made them suffer but Barcelona made most of there chances to come out top.
SPORTS