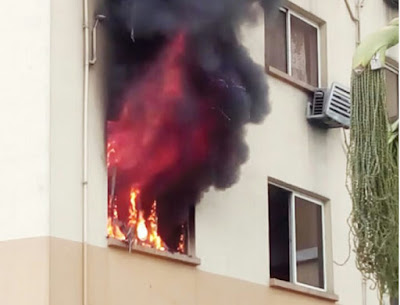 Commotion arose at the Golden tulip hotel at rivers state, Port harcourt G.R.A Phase two, as fire guts some rooms in the first floorin the popular building on tuesday.

It was gathered that the fire, which started in one of the rooms, forced occupants of other rooms to rush out of the premises, while other guests, who parked their vehicles on the premises, hurriedly drove them out.

Sources said the inferno was extinguished by workers in the hotel, who battled for about 10 minutes before the arrival of operatives of the Rivers State Fire Service.

There was, however, no human casualty, but property worth millions of naira was destroyed by the inferno.

He said, “One of the hotel’s housekeepers in the corridor of the first floor noticed heavy smoke coming out of that particular room that got burnt. The room was occupied by a customer, but the customer had gone to work when the fire started.

“The housekeeper, who first noticed it, raised the alarm and immediately the fire alarm was activated and all guests were taken to the muster point. When everyone was safely at the muster point, the process of extinguishing out the fire began.”
NEWS