Policeman Accidentally Kills a 14 year old Girl, while Struggling with a suspect's iphone. 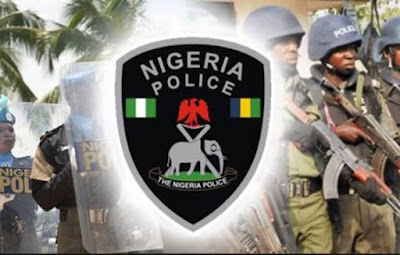 The Nigerian Police force has come under fire on a popular social media platform, twitter following the report by a user which alleged that a 14-year-old school girl who was murdered in cold blood by bullets accidentally discharged from an officer’s rifle in a very sad incident which occurred in Adamo area of Ikorodu, Lagos state.

According to the twitter user, Fabian Mani, reported the incident occured when policemen were raiding and searching pedestrians in the area.

They accosted a young man who was being questioned on why he owned an iPhone if he wasn’t an internet scammer popularly regarded as a ‘yahoo boy’.

The argument between both the policeman and the young man led to a misunderstanding which made one of the policemen carelessly fire his gun and according to reports, the policemen immediately ran away from the scene leaving their vehicle behind.

Afterwards the irate and angry residents were also reported to have set the abandoned police vechile ablaze.

Below are screenshots of the tweets: 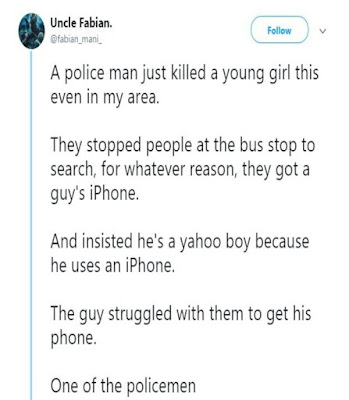 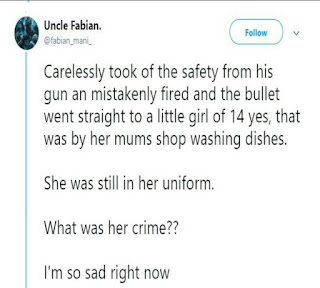