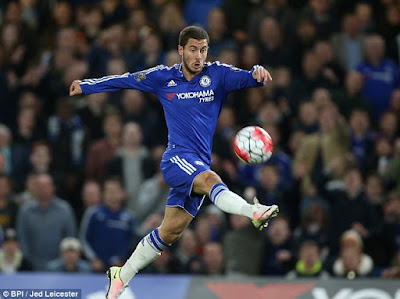 Spanish giants, Real Madrid have made contact with Chelsea about a summer deal for Eden Hazard, the UK Telegraph reports.

It is believed Real Madrid made contact with Chelsea about Hazard, shortly before they announced Zidane would be their new head coach on Monday.

Hazard who is a huge admirer of Zidane as a coach and named the French legend as his idol while. growing up.

HmChelsea’s transfer ban could block Hazard from joining Real, as Chelsea would be unable to sign a replacement.

However, the club is hopeful the Court of Arbitration for Sport (CAS) will overrule FIFA’s decision to snub a request to freeze the suspension during the appeal process.

The Blues value Hazard at £100million, even though his current deal expires next summer, whereas Zidane has been reportedly handed a £300 million transfer kitty.
SPORTS