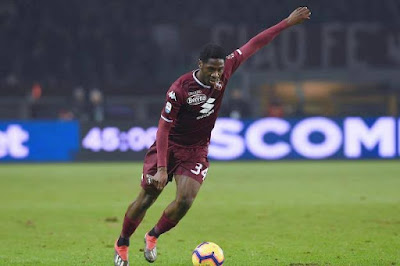 Super Eagles defender, Ola Aina, has been handed a three-match ban, after he was sent off in Torino’s clash against Bologna at the weekend, the Serie A committee confirmed yesterday, tuesday 19th of March, 2019.

Aina was who received two yellow cards during the 3-2 defeat.

Although he took to his Instagram page to apologize for his action, he has now been handed a match suspension for accumulating five yellow cards in the league, while his display of “intimidating attitude” towards referee Maurizio Mariani earned him further bans.

Ola Aina suspension will see him miss games against Fiorentina, Sampdoria and Parma, but he should be available for the Cagliari clash on April 14.