What Neymar Said After PSG Loss To United. 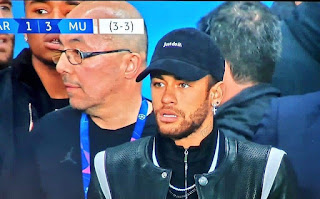 Paris Saint-Germain forward Neymar was  unable to play in either leg of his side's last 16 tie against Manchester United, but after a controversial VAR decision led to the Parisians being knocked out of the Champions League, the Brazilian was very critical of the referee, Damir Skomina.

The debatable incident came in stoppage-time as Diogo Dalot's shot appeared to clip Presnel Kimpembe's hand and the Slovenian deemed it to be a deliberate action, thus pointing to the penalty spot after looking at the VAR station.

"It's a disgrace," Neymar wrote on Instagram, coupled with a photo of the Kimpembe incident.

"They even put four people who don't understand football watching the incident in slow motion. This is unreal!

"How can [Kimpembe] use his hand with his back [to the ball]? 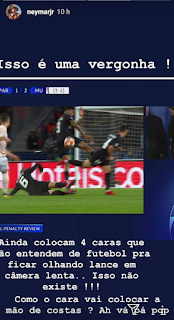