What Ronaldo Said After Sending Juventus Through An Historic Comeback To The Quarter-finals. 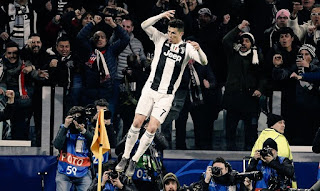 Cristiano Ronaldo acknowledged that he was purchased for moments like this.

The Bianconeri spent big last summer to bring him to Turin from Real Madrid
with big Champions League nights being at the forefront of their planning.

Juventus went into the second leg against all odds,  but Ronaldo shows why he his the top scorer in the history of this competition.

"It is a special night, not only because of my goals but because of the incredible attitude of the team," he said afterwards.

"This is the Champions League mentality.

"We haven't won anything yet, but this is a source of pride and shows we are on the right track.

"Juventus brought me here for this, to help and do my job, so I'm happy that we enjoyed a magical night."
He also had praise for Los Rojiblancos, who would have hoped he had broken their hearts for the last time after he left Spanish shores last summer.

"They are a great team and a very difficult opponent, but we are too and we showed that tonight," he concluded.
"We certainly deserved to qualify."
SPORTS