Why I Returned to Real Madrid as Manager - Zinedine Zidane. 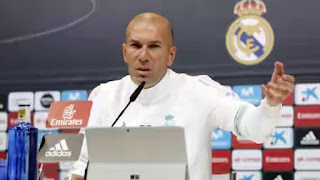 Ex-France International, Zinedine Zidane has revealed the reason behind his decision about his return to Real Madrid as manager after nine months that he walked away, he stated that he felt that  was the right thing to do.

He quit his job ad manager at Real Madrid after winning the Champions League for three consecutive years.

Zidane has now returned to replace Santiago Solari and becomes Madrid’s third manager this season, signing a three-year contract until 2022.

In a press conference on Monday night, he said that: “I know this is a special day for everyone. I’m very happy to return here and that’s the most important thing. I will be starting work tomorrow to put this club back where it deserves to be.

“It’s great to be back – not that I’ve been that far away.

“It’s a massive responsibility. I’m just one more member of the team, this club. I love football and I haven’t forgotten what we have won – but I also haven’t forgotten all the things that we did badly. I know where I am.

“I’ll put everything I have within me to make the team better.

“Things are going to change – they need to. But that’s not a priority right now. We have 11 games left, and the idea is to finish the season well.

“The first thing that entered my head when I got the phone call asking me to come back? I’ll come back – and here I am.

“I don’t have any debt to pay with Real Madrid, I don’t owe the club anything. I’m here because I want to be.