Zidane Returns To Real Madrid After 284 Days Of Goodbye. 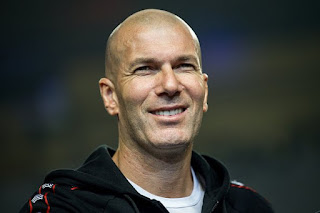 Former Real Madrid boss Zinedine Zidane to return to the club that has been his home since 2001.

Although he left the club on May 31 of last year, his heart has always been there and even though he was not expected to make such a quick return to 'Los Blanco's, he has made it clear that they were always his first choice.
The Frenchman will sign a contract, which will see him take the reins for the remainder of this campaign followed by an extra three seasons at the helm.

The move is a clear demonstration that he is coming back in a bid to implement a long-term plan and finish off what he started, although some might say that he has already achieved everything at the club after leading them to three consecutive Champions League victories and one LaLiga Santander title during his previous tenure.

Zidane returns to the club fully aware that he must made radical changes to the side in order to rebuild his team, something, which, had he not left the club when he did, might not have been necessary today.

He took very little convincing to come back, but it is hardly surprising after what he has achieved at the club both as a player and as a coach since his arrival in 2001 added to the fact that three of his sons currently play for them.

It is no secret that Zidane has received plenty of calls from teams who were looking to secure his services.

However, he was not willing to join just anyone for the sake of it and always had his heart set on a return to
Real Madrid.

The objective from here on out is clear, qualify for the Champions League and get some of the old faces such as
Marcelo, Isco and Gareth Bale back on side, who have been bit part players for a long time now, the last two even under Zidane himself.