EPL: Sarri speaks on Chelsea chances in top four after 2-0 defeat at Liverpool 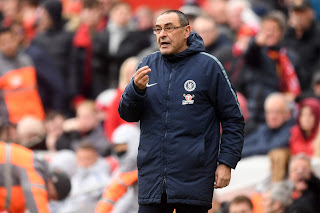 Chelsea manager, Maurizio Sarri has acknowledged that it would be hard for his side to finish in the English Premier League top four this season.

Goals from Sadio Mane and Mohamed Salah were enough for the Reds, who returned to the top of the table.

The defeat at Anfield has left Chelsea fourth in the Premier League table, but they could be overhauled by both Arsenal and Manchester United if they win all of their games in hand.

When questioned about Chelsea’s top-four chances, Sarri told Sky Sports: “It’s not easy of course but we have to fight to the end.

“It will be very hard for every team in the last month of the season.