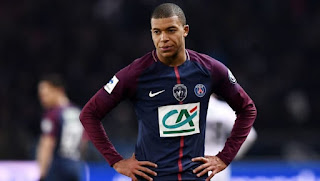 Paris Saint-Germain star, Kylian Mbappe, has called on his team-mates to show more commitment, after they were thrashed 5-1 by Lille on Sunday.

The French champions went on to concede four times in the second half for their heaviest league defeat under their Qatari owners.

The defeat delayed their Ligue 1 title triumph by another week.

PSG will be crowned Winners on Wednesday, if they defeat Nantes. They have secured 81 points after 31 games, while  second-placed Lille’s 64 after 32 games.

“We’re going to be champions but we cannot lose like this.

“It’s not normal. We lack personality, it’s one of our flaws, we have to correct this. We played like debutants,” Mbappe told Canal Plus.
SPORTS