Klopp picks one player for praise after defeat to Barcelona 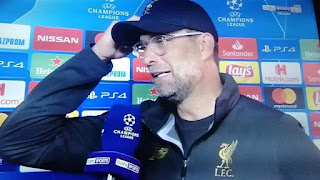 Liverpool boss Jurgen Klopp has highlighted  just how proud he is of his side, following their 3-0 defeat to Barcelona at the Camp Nou on Wednesday night.

Speaking about Lionel Messi, who scored a brace, Klopp was in awe of the Argentine's ability.

"Messi? He is unstoppable because it is impossible to defend that free-kick," stated Klopp.

"Maybe the [finish to make it] 2-0 was not his best goal but it shows that he knows that he is in the right place; I am a great admirer of him, but we have defended him well."

Despite the result, the German coach is full of hope  ahead of the second leg at Anfield next Tuesday.

"I think it was our best away game in the Champions League, not only this year but last year included," said Klopp.

"Against a side like this, playing this kind of football, I was completely happy.

"It's okay to lose away from home in Europe but the problem is that we didn't score today - that's not okay.

"I enjoyed the match, but at the end of the day we lost and that wasn't fun. I accept the responsibility.

"I said that I am really proud of them, that I really liked the game.

"They don't have to think about the next game against Barcelona; now we play Newcastle. That's our focus. We'll go to the hotel, have a proper sleep, get up in the morning, fly home and then prepare for Newcastle.

Mohamed Salah had a chance to make it 3-1 on the night and his coach spoke about what could have been.

"3-1 would be a better result and I would feel slightly different in this moment," Klopp lamented.

"What can I say? We showed we can have chances and these boys never give up, that's how it is - they never give up and I love that."