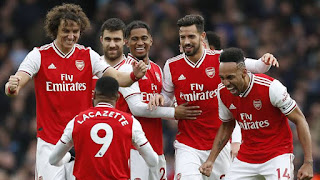 Arsenal have communicated to there players on the need to take a pay cut due to the hindrance on financial income caused by Covid-19 pandemic.

However, Arsenal players have disapproved this appeal to cut-off a percentage of there wage bill during this pandemic should football not continue this season or remaining matches played indoors.

Meanwhile, the club’s hierarchy and the players have been in several discussion to secure a better position over the past weeks. Also, Several options have been considered, but none has been approved.

Likewise, the idea of a 12.5% wage cut has been tabled to the players for a year should footballing activities not return to normal.

Meanwhile, there is a clause to pay the players in full should they qualify for the champions league this season. However, this has generated some doubts admist the players are they are currently ninth of the Premier league table.


Arsenal players are open to helping the club during this critical periods, but they are also weary of been exploited by the club. For the proposal to go ahead, there should be a minimum of 75% support by the players.

More negotiations are still ongoing to suit the demands of both party.
COVID-19 SPORTS