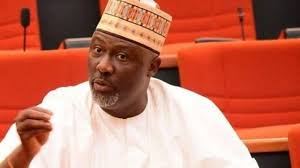 The presidency has cautioned former Senator, Dino Melaye, for spreading a stale video to manipulate Nigerians and wantoly critizise the government in power.

This was made known by the president personal assistance on media and publicity, Bashir Ahmad today April 16 on his official Twitter handle, @BashirAhmaad.

He rubuked him not to castigate unnecessary fears in the minds of fellow Nigerians during this emergency time.

Bashir Ahmaad tweet reads "#FakeNewsAlert; Sen Dino Melaye, a former member of @NGRSenate, with over 1 million followers sharing a fake news, an old video recorded last year to make a point that will create more fear among Nigerians at a time of national emergency. Does it really give you joy @dino_melaye?"